When I first read East of Eden (Steinbeck) I was obsessed with the part about Timshel. Without dragging it out forever [because it is a huge topic], they say that these scholars have been studying Hebrew to better understand the bible and they’ve realized that the word Timshel has been mistranslated to English as ‘do thou’ and ‘thou shalt’ but really it means more like ‘thou mayest’, then it goes on to explain the significance:

“The American Standard translation orders men to triumph over sin, and you can call sin ignorance. The King James translation makes a promise in ‘thou shalt’ meaning that men will surely triumph over sin. But the Hebrew word, the word timshel-‘thou mayest’-that gives a choice. It might be the most important word in the world. That says the way is open. That throws it right back on a man. For if ‘thou mayest’—it is also true that ‘thou mayest not’…It is easy out of laziness, out of weakness, to throw oneself into the lap of a deity, saying ‘I couldn’t help it, the way was set.’ But think of the glory of choice! That makes a man a man…This is a ladder to climb to the stars. You can never lose that. It cuts the feet from under weakness and cowardliness and laziness.”

It’s a long excerpt but I tried to cut out the non-essential parts and backstory. I posted some version of this on my bedroom door so it would be the first thing I saw every day for years. When I didn’t feel like doing something, I’d think of it. If thou mayest, it is also true that thou mayest not. It cuts the feet from under weakness and cowardliness and laziness. It has certainly been inspirational, but I’m starting to think it has contributed to lots of disappointment in myself.

do I run a lot? Well if by “running” you mean drag my soaked and freezing legs through the snow then yeah, I do it all day every day.

I’ve been struggling this week to get out and train. Mainly because of our god-awful weather up here. It’s stormed every single day multiple times, and there’s nowhere that you can go more than a couple miles on a trail before you hit the inevitable snow. [what I’m missing right now is why the fuck isn’t the rain melting the snow?!] 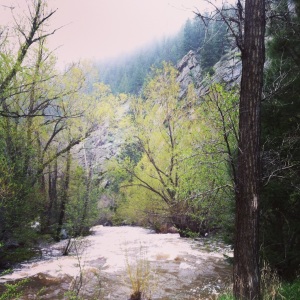 Every day I have good intentions, I wait for it to warm up a little [if you’ve forgotten, the climate up here in the high rockies is called “high desert” and it means that there’s so little humidity and the air is so thin that we warm up quick with the sun but as soon as it sets the temperature drops 30 degrees at least]. I go out to run, and 3 miles in I’m wading through snow [at this point in most places the snow is ankle-knee deep now, but some places like Mt. Massive it’s still hip-waist] and it’s suddenly thunderstorming again. So I turn back, go home, and hope that I can wait it out and go back out after it clears up. It then clears up for a half hour and as soon as I get out again it’s snowing and 20 degrees suddenly.

This was the story of my whole fucking week. I never got more than a few miles in, and I didn’t get out on the bike at all because the storms made the path slippery and I also don’t like my gorgeous new bike to be ruined like all of my previous commuting bikes.

In other news, I got a library card. And I re-read the entire Millenium Series [it’s the Girl with the Dragon Tattoo, if you don’t know, and that’s a total of about 1,500 pages]. That’s basically what I accomplished in this entire week. So I’ve weeble wobbled back and forth about how I feel about it. Because when I don’t get out and do epic shit every day, I feel like I’m wasting my life and I’m wholly disappointed in myself because TIMSHEL. I have the choice and that word cuts the feet from under my laziness and I still chose to sit around anyway. Then I’d think-I don’t fucking feel like running in 30 degrees and pouring rain. I don’t feel like wading through the snow it is NOT FUN ANYMORE. And isn’t that the point? It’s starting to feel like a job that I hate. Usually, days where it storms are occasional and those lousy training days are balanced out by all the amazing gorgeous mountain-climbing sweeping vista views days. But suddenly storms are every single day.

it wasn’t the worst day on La Plata Peak

I finally went out yesterday to La Plata (particularly because the weather was forecasted to be decent for once) and although it looked like serious storm clouds I headed out on the trail, hoping the clouds would pass. It rained lightly but not bad and started clearing up. However, as per usual, only 1 or 2 miles in the snow drifts started and not only do you have to wade through them which is bad enough but they often camouflage the location of the trail. There’s usually tracks where other people who know the route have passed, so it’s generally okay. But after the river crossing, the snow suddenly gets knee-deep (plus) and the tracks disperse in 3 complete different directions then stop entirely. It’s sort of a field that heads uphill and goes back into the forest, and you could see the bushes sticking up out of the snow so I couldn’t see anywhere that there was a break in the bushes. I’ve done this trail in the summer [and attempted once this winter but didn’t make it much further, even with the route instructions in hand] but nothing looked particularly familiar. I’d like to take this opportunity to mention that should the Forest Service or whoever’s in charge like a free helper to mark these fucking trails so we can all stop wandering around like helpless idiots, I’m volunteering.

water stops for no one and nothing (on La Plata)

I wallowed for a while yesterday, because I thought I was finally going to get on track with the la plata ascent and it turned out all wrong, just like everything else in the past week or two. And I’m really struggling with this idea-am I just lazy or do I have the right to say I don’t want to do this right now? Is that okay? I’m so far behind in my Nolan’s training because the snow and the weather are 1,000x worse than I could have imagined and even on good days I can’t physically move fast enough through the snow to get the mileage and gain in that I should be at this point. As a longtime practitioner and teacher of yoga, I feel like I’m listening to myself and choosing to do what I need, even when it means staying home and reading instead. But on the other hand, if I’m going to achieve my dream of Nolan’s then when I need is to be out there all the time, despite all obstacles. What is the difference between laziness and choosing to do what I want?

The second the rain let up yesterday I was out on my bike. I rode hard and fast for 24 miles, until it was raining so hard I couldn’t see the path in front of me and my face was burning from being slapped by the raindrops(/hail, we rarely get away with rain that’s *just* rain). I wondered if it was punishment for my laziness or that the fire I’ve been smothering staying inside just needed to blaze.

I know I’m supposed to learn something from this terrible clash with mama nature, but every time I think I understand it gets so much worse. It stormed all the rest of the day yesterday, and instead of letting up last night it turned to snow and dumped 6”. It’s still snowing right now as I write this. [update: I wrote this on Tuesday and now that I’m posting this it is snowing AGAIN and I’m thinking I’ll go home and watch Cool Runnings which I picked up with my handy library card]

“This is a ladder to climb to the stars.” But where are the stars?

There was an error retrieving images from Instagram. An attempt will be remade in a few minutes.