When it started snowing on Wednesday I was annoyed. When it continued snowing on Thursday I was already pissed. I thought after work I would run all day. I adjusted said plan to spend the afternoon swimming laps instead, but when I arrived at the pool the sun was coming out and I cut my swim short to run Ptarmigan…only to find the sun immediately replaced by another snowstorm. And how it stormed. Friday I woke up to a full foot of new snow, and to put this in perspective that’s enough snow that I couldn’t open the back door to let Lu out in the morning. I shoveled the foot of snow off of my car and went to work, only to return to another FOOT OF SNOW in the afternoon; so much snow you couldn’t even see the dent in the driveway from the foot of snow I took with me in the morning (I totally got stuck in my street). Saturday it snowed, and Sunday it was occasionally sunny but it also snowed.

You may remember that I was recently thrilled about the amount of exposed trail up here, and the impending spring and summer when I would get to run on the ground again. I can’t even dredge up hope for that dream anymore, and here’s why:

So yesterday I looked at conditions reports on the southern Sawatch, and as recently as 8 days ago someone was on Mt Yale reporting that the first couple MILES were dirt, and there wasn’t enough snow anywhere to ski. The weather was reporting 50’s and sunny in Buena Vista, so I thought good enough, let’s go. Lu and I drove to BV in the mid-morning, coffee-in-hand, and arrived at the Denny Creek TH parking lot that had been thoroughly plowed and sunned and was perfectly empty at 10am. It was sunny and relatively warm. I did Yale towards the end of last summer but I was racking my brain trying to remember where the TH actually was from the parking lot, and boy I wish I had taken a picture because it was comical when I realized that it was so thoroughly buried with snow that you couldn’t see the sign, and there were no tracks to speak of.

I’ve gotten used to this common mountain scenario since I’ve moved here: there’s a baselayer of snow, someone makes tracks on it, when it snows again you still have the packed snow beneath it. Well. This was much different. There was no baselayer and no previous tracks, just the dirt trail. Like this was the first snow there ever was. And it was three. fucking. feet.

I dug out my snowshoes and sighed. 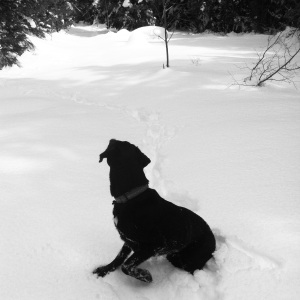 Luna doesn’t care if she’s buried or not

An hour later, we had lost the trail and the sun and it had begun to snow. We arrived at a river crossing and I nearly fell in. Each sluggish step in the wet snow dragging each snowshoe miserably. Yeah, I was totally angry. I know it’s not right, but I’m just done with winter and I’m so mad it snowed again [and hey, guess what! This is the usual for the high Rockies. Silver Lake, Colorado holds TWO U.S. records for snowfall-the most snow in 24hours (76”) and the biggest continuous snowfall (100” in 85hours) and it was a late April storm]. The reality is, our snowfall was really light this year and we NEEDED this huge storm so we have water this summer; okay, I totally get it! But it doesn’t make me feel better about the current state of dragging ass in the cold woods [especially when I tasted summer in that glorious weekend I spent running the front range] 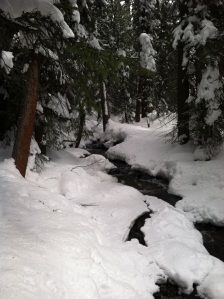 this water. was delicious. and the coldest water that exists in the world.

It gave me a lot to think about. When I was still teaching yoga full time I did a 5-week series about expectations. How and why we have them and their effects on our lives and well being. Others expectations of us. What it boils down to is something we all already know-expectations set us up for disappointment. I’ve been dreaming so hard of summer and the weather was good so I expected it to stay that way and get better. It took moving up here to realize that you can never rely on anything when it comes to weather. I know, I know, in your part of the country the weather is CRAZY and unpredictable and you can have all four seasons in the same day (are you realizing for the first time that you’ve totally said that, because EVERYBODY thinks that about where they live? Is your mind blown!?)

But here’s the thing about the high country. It goes from 50 and sunny to 0 and storming in less than five minutes, and I’m not exaggerating for effect. I counted (for the first time) and it went from sunny/clear/warm to FULL ON SNOWSTORM and back 7 times today. SEVEN. It might be 60 degrees and sunny for two weeks, then it drops the biggest storm of the year on you and pummels you for days with January temperatures. It’s also not unusual for this to happen once summer is in full swing; in fact, it’s likely to happen several times this summer that we get sudden snowstorms. Plus, at high altitude (I’m at 10,200) the sun feels hotter and it warms us (people, land, air, whatever) up faster, and the thin air doesn’t hold heat very well, so the temperature swings can be truly incredible.

My weakness this past week has been my expectations. But I’m not going to get anywhere training for Nolan’s holding a grudge or staying inside to avoid snow because I was ready for summer. I could let every step be wretched, feeding the anger and frustration. Or every step fuels the fire that burns out my weaknesses. Self discipline through austerity-and once that garbage is burned off I won’t even notice the snow, excepting the lightness of burdens being lifted. 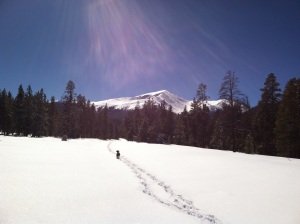