I headed to Buena Vista on Monday with certainty that this time, the Sawatch Range was going to get wrapped up. With just Antero and Princeton on the docket, what could go wrong? Well, the weather was forecasted to be terrible. But I wasn’t overstretching myself this time, I planned Monday and Tuesday for this trip so there was basically 98% chance that I’d make both summits. 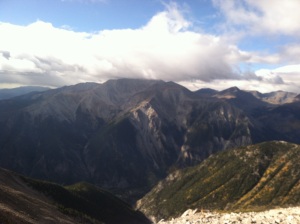 Antero. I took this the next day from Princeton.

As I mentioned before, Mt Antero is a part of the “highest network of ATV trails in the country” (congratulations, whoever thought wilderness was a good place for that) so you hike up the ATV road pretty much the whole way (and btw, whoever is in charge of trail building, I will learn how to build trails just to build a real trial up Antero; it is insane that nobody’s done it). And it’s just mileage and gain. Mileage and gain. There was some rain on the way in, but not by any means the worst thing that’s ever happened. Because of all the water, though, the rivers were wildly flooded. The first river crossing is so wide that it spread out the extra water and I could still cross at the designated crossing. The second crossing, however, was well above the rocks to cross it. I ended up taking off my shoes and pants to wade across. It was one of the coldest moments of my life (spoiler alert-things get much colder next week). It was maybe 40 degrees and I wasn’t up high yet, I wasn’t about to spend the rest of the mileage in wet pants.

The rest of the way up was pretty uneventful. When you finally reach the top of the road, you’ve got maybe less than two miles left climbing up the talus field to the summit. It was actually partly sunny for this part.

On the way up the talus field

Arriving on the summit, the view was epic and the clouds, with all the crazy wind, felt like they were on some kind of turbodrive. You know how people build forts on the summits for protection? Someone had built one like a throne looking out to the west. Lu and I stayed there about ten minutes, snacking on trail mix (you know, Whole Foods apparently discontinued my favorite trail mix!? Even more reason to finally make my own. Some day.)

At first, it was cloudy and windy on the summit

then, it looked more like this. Taken from my THRONE atop Mt. Antero while I snacked gloriously on trail mix.

Then, suddenly, the temperature dropped about ten degrees and the wind picked up. I packed up the trail mix and Lu and I ran off the summit as fast as we could. We made it back to the road, where a nearby smaller peak offered marginal protection, before the storm rolled in. It got dark and wild fast, the wind picked up so much I could lean most of my body weight into it and it took an incredible amount of energy to continue. The precip was what I like to call RAILS. Rain/hail/snow. It was hard and sharp but wet and frozen all at the same time. Things were pretty iffy until we got back to treeline, but honestly the experience (though miserable) made me wonder why I worry so much about storms.

Back below treeline, the precip mostly stopped and the wind was broken by the environment. I saw a herd of mountain goats (picture turned out AWFUL even though they were SO CLOSE) then the sun actually came out eventually for the last bit. I passed a guy on an ATV headed in and he stopped to ask me if I’d been caught in the storm and if I’d seen any mountain goats. He confirmed that he’d seen the same herd the day before, then shared with me that he’s an archer and has a permit for hunting mountain goats. Insert horror/crying here. Hunting mountain goats. Is a thing. Have I mentioned lately how I sometimes question humanity?

Tuesday was serving up Mt. Princeton and I woke up in good spirits, ready to rock. For what I’m pretty sure is the very first time, I was on the trail early enough to see the sunrise. 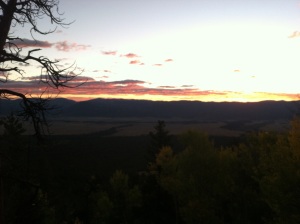 FINALLY I get to see a sunrise.

Princeton is another sob that has no trail of its own until you hike up an insane ATV/Jeep road for miles and miles and miles. (again, who do I talk to about this? I will build the damn trail myself.) Not surprisingly, no traffic on this mountain either. I eventually saw a car pass me with an older couple in it that stopped, got out, and got back in and drove back. They were the only people I’d see for the whole day.

and after the sunrise. still awfully nice. 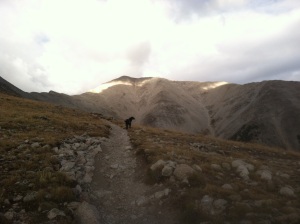 And the thing about talus is, it takes so long to pick through it that it doesn’t feel like you get any closer. This was the theme of the trip. It’s taking forever and the summit is not getting any closer. The weather was turning slowly but surely as I headed up, but after the two storms I’ve been in in the last week or so, I’m honestly not that worried. Unless there’s lightning. The final ascent was a real practice in triumph of the human spirit. Definitely one where I thought I’d rather be doing anything else but this. Just slogging and dragging and misery all the way up. Didn’t spend long up on the summit, the view was…lacking.

The talus field on the way down and out didn’t go any faster. It was maybe even slower. Needless to say, I wasn’t in high spirits anymore at this point. However, the trail mix I had with me had peanut butter cups in it. So I had that going for me, which was nice. Making it out of the talus field though….now that was an epic moment. Maybe even better than summiting? Although if I hadn’t summited I wouldn’t have felt so good right then. The whole way down the road I daydreamed about attempting Nolan’s. (if you’re curious…http://www.mattmahoney.net/nolans14/)

On Wednesday, Mark and I were scheduled to go back for the 2 Mosquito Range summits that we had missed back in like May (Lincoln, due to dangerous icy ridge and Democrat due to a cut on Luna’s foot), and back Sherman while were out there. Sherman is the most depressing 14,000ft mountain I’ve ever been on. The trail is an old mining road, the mountain itself is unappealing, and there are no good surrounding views either. 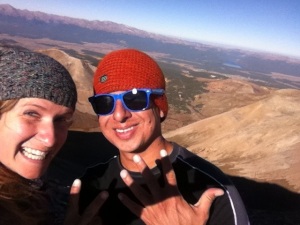 the one and only picture we took on #25, Mt. Sherman

Lincoln and Democrat, however, offered epic views and a little bit of fun.

Summit of Democrat. I ran up it, collapsed on that rock until mark got up there, and posed like a badass for this picture. 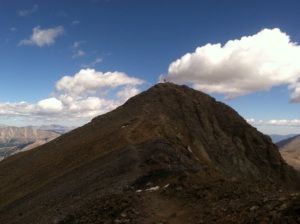 I’m totally up there. That’s the summit of Mt. lincoln

It had been a long day with the driving, Mt Sherman, more driving, and two more peaks to bag, but we were still keeping it together. There was much discussion of 80’s movies, which made the elevation gain pass faster than anything ever. There were a lot of people out, including a couple different groups of stoners (again, hiking fourteeners is what stoners do in Colorado?! Amazing. I only played the sims back when I smoked pot.) Summiting Democrat felt especially good since it was NUMBER 27.

In anticipation of my birthday next week, and my 28th peak in my 28th year, without further adieu here is the list:

#28: CAPITOL PEAK, coming up next week