The morning after where we left off, I had just summited Shavano and Tabegauche, and attempted (but failed at) Antero. On the docket today is Yale and Princeton, but I woke up feeling a little beat.

I started out actually pretty damn early, so I felt great about that. I wasn’t feeling great in general, however, and the first couple miles were a bit tainted by the idea of rushing this ascent in order to make it to Mt Princeton, ascend, descend, and make it all the way back to Denver in time to teach an 8:30p class. The rushing was much more strenuous than the elevation gain.

Then I had a brilliant epiphany. What if I didn’t do Princeton today? I struggled pretty hard with this decision. I’m already behind on mountains and at this point I had everything scheduled. I considered all of my options in terms of rescheduling. I did my best to justify skipping Princeton. But, ultimately I didn’t want to do it and once I made the decision to summit Yale then go home I felt a big burden being lifted. Part of this process is surpassing what I thought to be my limits, but part of it is understanding why and if I really want to do things.

The rest of Yale went smoothly, I passed several groups and was the first on the summit, then even had it to myself for a while. It was an absolutely gorgeous summit. I made a fast but not rushed descent, stopping to chat with a bunch of people on the way down. There was a girl that asked to take a picture with Lu as if she was her and her boyfriend’s dog…that was weird.

me and my Luna bug, feeling the bigness of summiting Yale.

On my way home from Buena Vista I spent a long time thinking about my schedule between now and my birthday, to see how I could adjust to add Princeton and Antero. Tomorrow was supposed to be an all day training ride for the planned 82mi ride to Long’s, Long’s ascent, and ride back to Denver that was schedule for next Monday Tuesday. What I realized is, if I wanted to get all the peaks in before my birthday without subbing any classes I’d have to do Long’s tomorrow so there’s time to go back to BV for Antero and Princeton next week.

Wednesday morning I did not want to set an alarm, so I woke up around 8:30 and hung out making breakfast and drinking coffee. I got lost on the way to Long’s after mixing up some highway numbers and ended up starting out from the TH a bit after 11:30. And yeah, there were storms forecasted.

I did not take this. But I accidentally deleted my picture from this viewpoint of Long’s, on the long way in. I’ll go to the right, around the back, and pop up through that notch you can see about 1/3 from the left to climb to the summit.

I burned in pretty hard and fast, but stopped to talk to a nice old man right before the trail splits toward the lake and the boulderfield. He was headed in to fish until the weather turned, and was highly disturbed that I was starting a summit ascent so late in the day. I tried to explain to him that I know what I’m doing, but he was unconvinced, and asked me if I’ve been on a fourteener before. 🙂

It’s a good long ways to get to the technical part. Even crossing the boulderfield takes ages, winding about then up a talus field to the keyhole that looks much shorter than it actually is. Once you cross through the keyhole to the other side of the mountain, you’re rewarded with epic views and it’s all class 3 from here. The route’s well marked so it moves pretty fast. Long’s Peak is technically a part of Rocky Mountain National Park, and dogs aren’t allowed so I left Lu home for this one so it was nice to enjoy the scrambling without having to keep track of her. I met some clearly very high gentlemen headed down the very steep and technical gully, and I was amazed that Colorado stoners are so motivated as to climb such long and technically difficult routes (14 miles with a good amount of class 3 technical that is mildly dangerous but also takes a pretty long time). The last two guys I saw claimed to be the last heading down from the summit, which would make me alone on the route for quite a while. They estimated 30 minutes to get through “the narrows” then another 40-60 on the final ascent. I was thinking that when I got to the top of the gully I wouldn’t be too far off from the summit, so the rational part of my brain worried slightly about the impending storms…the rest of my brain felt a little too excited. 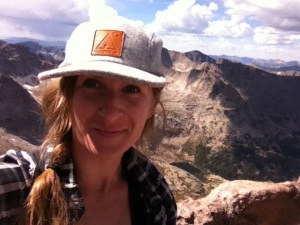 Turns out, the two guys that gave me the time estimates (who appeared to be competent climbers themselves) were either very slow themselves or had highly underestimated me and given me an inflated time to the summit, because 30 minutes later I was standing on it, confused as all get out, trying to figure out how I ended up there so quickly, and if it was possible that I was not, in fact, on the summit. But I found the metal seal and the capsule containing the register so I knew I was there. I took some pictures then headed down, hoping to make it through the technical before getting rained on.

I made it to the top of the gully where I’d be downclimbing before traversing that class 3 west ridge again when it started hailing. And I wasn’t scared. Maybe I should’ve been. I moved as quickly as possible coming down the now hail-covered slippery rock, feeling like a kid out playing in the rain.

I didn’t take this either, and I don’t know these people. But I stupidly deleted almost all of my pictures of the sweet route I was on to clear up memory for a later trip, you’ll hear about soon

After getting back to the keyhole and crossing over to the east side again the storm was gone and I ran the whole way back fast and dirty, hoping to have time to catch some dinner in Boulder before I had to be at the search and rescue meeting. (victory). 14.5mi, 5100ft gain