I had this trip planned since Columbia, hoping to finish the Sawatch Range in one fell two day swoop.

I raced home after class on Sunday night, picked up Luna and my bags, stopped at Jimmy John’s, and headed for Salida. Rolled into the TH parking lot at 11p, I figured no one would notice or care if I slept in the car in the parking lot so I did. Set my alarm for 6a.

My alarm never went off, it turned out my phone got too cold overnight and killed the battery. I didn’t bother to turn on the car to see what time it was, but I’d guess based on the sun that it was 8am ish. There were two other groups of two on the trail to Shavano, as I passed them both told me they were going to head to Tabegauche. As of yet, I still did not know how to pronounce Tabegauche, and neither did anybody else. Oh the other downside to my phone dying overnight was that I had no camera…another reminder that I NEED TO GET MY CAMERA FIXED so I don’t rely on my phone.

So I was sick last week, just a regular cold but I realized while I was trying to burn up Shavano greasy-fast that I was not back to 100% (what doesn’t kill you…makes you weaker?). There’s a pretty fair amount of my snot all over that mountain, and I was hacking up my lungs pretty good. I made decent time but not good by any means; taking way longer than I thought.

I summited Shavano and headed down the North ridge as quickly as I could negotiating the rocks. The Tabegauche ascent was mildly grueling in my already tired state. I passed two more guys on their way back to Shavano, they commented on my “speedy” pace (it’s all relative).

No filter. Looking back on Shav and Tab on my way to Antero

Tabegauche was my 20th fourteener this year. When Abby and I were sitting in the Snug in January talking about 20 14ers, the idea seemed possible but far fetched. When I just recently amended it to 28 14ers, the idea seemed ridiculous. Standing on that 20th summit, I could see how far I’ve come. How much I’ve changed. The mountains don’t change you. YOU change you. Every choice you make, every step, every breath. A year ago on Gray’s and Torrey’s I was dying and we watched a woman run right up Gray’s. I never thought that would be me. You don’t learn new things, these experiences strip away the things that aren’t really you.

Back on the summit of Shavano, I caught up to the boys and we met up with an older gentleman hiking by himself. He told us the two groups of two had both turned back. AND he told us that it’s pronounced TAB-A-WASH. The descent was normal, but the whole thing took longer than I expected, as I mentioned. We got to the Antero TH at 2pm-looking at a 16 mile round trip. If you do the math, I’d have to avg almost 3mph to make it down before nightfall. I started up Antero as fast as I could (let’s be honest, my pace was barely even a “wog” at this point). Antero’s fun because instead of building a trail, you use ATV/Jeep roads. So you’ve got the lingering exhaust and smell of gasoline to deal with, not to mention the actual silly little trucks getting in your way all the time.

The good news was, I charged my phone (PICTURES!) and the views were gorgeous. 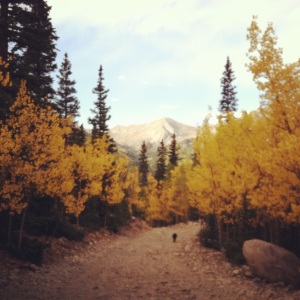 I’m pretty sure we’re looking at Princeton through a grove of fall color Aspens. And that little speck is Lu

The bad news was, it started raining off and on. The other bad news was, I was exhausted. The even worse news was, I was keeping track of my time and mileage and I was not making 3mph average, in fact by mile 4 or so I’d downgrade “wog” to “staggering”. I was fully determined to make this summit when I started out, even if I had to come back in the dark. Now, I kept thinking mountain lions. Bears. Things were getting a little twisted up in my head. Exhaustion really messes with you. To be honest, I actually considered calling it but saying that I did it. Which is not a thought I’d ever have in my right mind. Nobody cares about 28 14ers other than me, and if I was sane I would’ve known that a fake summit would be worthless to me. But I absolutely wasn’t sane. Right after mile 5, I turned a corner and realized that what I had been thinking was the summit was a false, and absolutely horror is the best way to describe my reaction. I looked at the time, and realized that it was going to be a long time to the summit, and if I carried on I’d be making pretty much the entire 8 mile descent in the dark. The forest at night is now my number one fear, apparently [but guess what’s still not-I actually RESCUED a SPIDER from drowning in my tub while it was filling for my bath]. I turned back.

Seriously. This is a real picture.

The descent was long and painful, my knees were already a little crushed from the day I’d had. I did get to dream of picking up some snacks and a Coke in BV before I headed to the TH for tomorrow. I don’t like the decision that I made giving up on Antero, it makes me feel weak, inadequate; but, being recently sick and obviously feeling the effects from it, I don’t remember the last time I’ve been so exhausted. I know it was a good call, and I can’t change it so I don’t regret it.

From our way back down. Miraculously, the weather cleared up (jerky weather, only looking ominous when I’m still headed to the summit). This mountain (that I have yet to look up on a map, Antero is behind us) actually was rainbow colored. And that light magic just happened on its own.

Coming up: tomorrow holds in store Yale & Princeton, but there are two problems: I’m exhausted, and I really have to push if I’m going to make 21 miles before I have to be back in Denver to teach my Tuesday night class.