As you know, Capitol was planned to be the piece de la resistance, the 28th summit over 14,000ft of my 28th year, and we were to summit on the morning of my birthday. It is occasionally referred to as the most technically difficult 14er in Colorado, and it certainly makes the top 5 for most dangerous and most deadly due to its long ridge ascent that is sometimes class 4, very exposed, includes challenging route finding, and, of course, the crossing of the famous “knife edge” ridge.

thar she is, so far in the distance, to the left 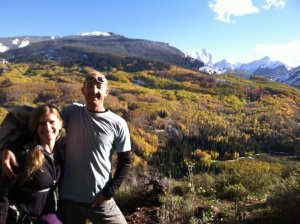 Dan and I at the TH

We had the game plan of hiking in to the lake (5.5miles from the TH) on Thursday so we could be ascending to the ridge early in the day on Friday, giving us the best possible chance to summit. We left later than we had planned, and then there was the snow. Oh, did I forget to mention? It’s been snowing ALL WEEK in the Elk Range and there is now FEET of snow. So in order to set up before nightfall, and because we assumed the temperatures would be even lower near the lake, we made camp a mile or so out from the lake in a relatively flat area beneath some trees.

This was taken not very far into the hike, as you can tell because we’re not dragging ourselves through snow yet

I crawled immediately into my sleeping bag, hoping to get warm, because as darkness fell shit was getting cold. To no avail. I did my best to eat my frozen peanut butter and jelly sandwich and drink some water because I knew I needed to, but it’s hard when you’re cold. That might be the biggest struggle, is that you don’t want to eat or drink. Dan brought me a bottle of boiling hot water to put in my sleeping bag with me and that was a real game changer. Not to imply that I slept more than about 45min total over the course of that horrible night. This was my first experience in winter camping. Don’t let the horribleness of the situation fool you, now I’m hooked on winter camping. It was 15 degrees that night. 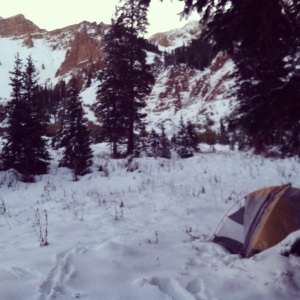 This was taken on my birthday morning. It’s what it looks like to camp in January. But it was October.

Waking up in the morning, you have to surrender your sleeping bag and put your shoes back on, that have frozen completely solid. You know that when you get moving, there’s a better chance of being warm again, but that seems very far in the future. Dan said, “Happy Birthday, Sarah.” Yep.

During a river crossing, I slipped off the snow covered log I was on and ended up directly in the river. We also refilled water bottles here, and let me tell you that ice cold mountain river water is the freshest water I’ve ever tasted. Up until just before the lake we were fortunate enough to be following a trail that a man with two horses and a dog had made (I suppose he was an actual cowboy), but his trail disappeared and we were left to break trail through knee deep snow on our own. Breaking trail is so much work. At the lake, you turn and head up the ascent to the saddle that will bring you to the ridge.

Here’s the ridge. We’d be hiking up to the saddle on the left just out of the picture. The right is Capitol Peak.

This part was arduous. I imagine when it’s not covered by feet of snow, the trail switchbacks because it’s so steep. You do a lot of sliding back down, and some parts I couldn’t even bring myself back up to standing and ended up crawling to a less slippery place. My feet were freezing but my torso was burning up and sweating. It’s that weird feeling like you’re warm again, but that’s a very tenuous moment. Dan and I sat on the saddle for a few minutes, eating frozen clif bars and speculating about the upcoming ridge.

Up until this moment, we had been thinking that the ridge looked rocky, like the snow had mostly blown off of it. We could see now that most of the ridge was covered in several feet of snow, including terrifying cornices that obscured the actual location of the ridge itself. Heading out, Dan tested traversing through a cornice and it was successful. Each success doesn’t really make you less afraid, I think. But it does make you more likely to go on to the next dangerous decision and choose to keep going. There was a bit of steep scree scrambling that was unsettling as it was mired with ice, then some technical climbing. Dan waiting for me at the top of this bit and once I stepped onto the rock above and he turned to take a step forward, the cornice beside us, one foot away, broke off suddenly and avalanched down the side of the mountain. I think that moment was the hardest my heart has ever beaten. [I’m unsure if it’s acceptable to use avalanche as a verb…I’ll look into that in the future]

This was the steep scree bit followed by the technical bit.

Before each increasingly dangerous obstacle, Dan would turn around and say “you okay?” and I’d say “I’m okay if you’re okay” and we’d trudge on. There was another technical bit that made it apparently exactly what class 4 is-it’s complete vertical climbing with very obvious ledges and handholds, kind of like 5-.2. Another interesting section as most of the good foot ledges were covered in ice and snow. The best part of this bit was, directly underneath it is a slide into a gully that would likely result in 100’s of feet. Do you remember the first time I climbed, and I was fascinated that each time you make a move and take a risk, it feels very much like you’re risking your life, but you’re really not because someone at the other end of the rope will catch you. In this moment, the risk was very much your life, and you don’t think you’ll make a mistake but you don’t know. This was a pivotal moment, I realized I will without flinching risk my life to touch the sky. Before you judge me for that, is it so much better to waste it?

As we began the traverse around K2, the snow got increasingly deeper and it seemed we were not only casually walking into the complete unknown (wtf is under 3-4ft of snow? we don’t have any idea what we’re stepping on) but also putting ourselves right in the middle of what could later be a big old snow slide. After a decent amount of this waist deep trail breaking, we stopped and looked at each other. We agreed it was time to go back. The truth was, we had long since passed any idea of “safety” and although successfully crossing various obstacles made us believe it was okay to attempt increasingly harder ones, the second half of the ridge promised to be much more terrifying, much more technical, more exposed, etc and when we reached those obstacles it was going to become more and more likely that we really wouldn’t be able to cross them at all. The danger we could see, too, was that even if we kept going, made it past the knife edge and other terrifying ice and snow covered feats, by the time we got back we might not be able to cross snowy traverse we were standing in without a snow slide that would certainly be fatal, due to the perfect sunshine that would’ve beaten on it for hours. 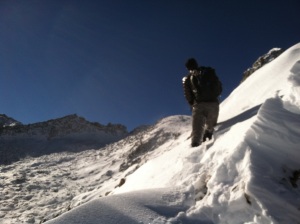 It just gets deeper from here.

I knew when I chose the most epic of peaks that there was a risk of not making the summit on my birthday. Even before the early-season snow. I knew I would be bummed if we didn’t make it. But, attempting that ridge in January conditions was the most epic thing I’ve tried. At the point where we decided to turn around, I was not upset at all. I knew I’d get my 28th summit. Last year on my birthday, I went shopping at the second hand store, got ice cream for Lu and I, and had dinner with my girlfriend at the time (and she was late). This could not have been a more perfect way to cap off a year of doing epic shit, of blazing, of adventuring.

28 fourteeners did not actually seem possible when I considered the idea. But, I’m not the type to let such little things stop me. I didn’t finish today, but I will. And it will be epic.

Side note: coming back across the ridge and downclimbing the technical sections might have been even more terrifying. We drank my summit beer on the hike out.