I hadn’t gotten to a fourteener since the epic Sawtooth day of awesomeness, so I got this guy on the books. Mt. Massive (14,428) and Mt. Elbert (14,433) (you guys know how much I love parentheses-elevation is speculated, there are a lot of numbers floating around but they’re all within a few feet).

Lu came with me to my Monday morning class, then we headed to Mark’s house to set out for Leadville, CO (but first-coffee and a quick grocery store trip). With iced coffee and frosted donuts, we were en route to the mountains.

On the way into the national forest to the TH, we came across my friend Chris from the Evans hike who was meeting us for the hike up. I had chosen the Southwest slopes route because we were going to be getting a late start-we hit the TH at 11am. So we were looking at 9ish miles and 3,950′ gain. The first couple miles were in the woods and meadow and very lovely, but the gain started pretty quickly and we were headed up.

Mark was feeling hella strong (probably all of that Orange Theory working out, we speculated) and I was feeling hella-not-energized (here’s a moment that I’m going to take to tell you that I did not properly feed myself or hydrate on Monday…I did not take this trip seriously enough and had cookie dough and Coke for dinner the night before…then coffee and donuts for breakfast WHOOPS. Lesson=learned) and my thighs were BURNING and I wasn’t getting to my second wind very quickly. So Chris and I took it relatively easy while Mark trucked on.

This was basically the story of the whole ascent, but it was beautiful and pleasant. When we reached the top, Mark was sitting on the rocks chilling and we commented about where the summit actually was (Massive has several false peaks) and we were informed that we were on it!

The ascent went pretty quickly, we were back down around 6:30. Chris was dying to put his feet in the river, and Mark and I were dying to go into Leadville for some Coke. Sad, right? Nothing like a cold soda after working your thighs to death! There is KILLER camping in the forest between our TH and the Elbert TH that was further east on the way in. We picked a spectacular spot in great vicinity to the roaring river (and with the world’s most epic firepit, that I, of course, didn’t take a picture of because my phone was dead by now). We had Mark’s tent so it was put up in a jiffy, and I used my badass fire starting skillz to get a roaring fire going to cook our veggie dogs and bourbon baked beans over. Chips and coke too!?! Plus-Lu got the extra “dogs” and beans so we hit the tent with full happy bellies.

Not quite a 5am wake up, but 6am so not too shabby. We broke camp and headed to the Elbert TH to rock out one more mountain before we had to head back to Denver. The Elbert TH was already very crowded, the parking lot nearly full and a line for the highly overused bathrooms (should’ve pooped at the campsite, damn). There’s a bit of trail in the woods that’s a nice windy hike, then suddenly BAM! steep incline that never lets up. We passed several people in this section, constantly thinking- any second now, this steepness will let up. It never, ever did. It was a wild trail, the standard route, just up and up with no breaks. But, to gain 4700′ in 5 miles is a lot!

We were fully prepared with food and water, though, and I felt amazing on this hike. Just hauling ass and taking names. We continually encountered more and more people-good lord this trail was busy on a Tuesday! Then we got to the steepest of the steep parts! Oof! I had a mantra in my head on this one-can’t stop, won’t stop. I was rocking as hard as I could. We had seen 3 people trail running on this route (I know, right?? New goals) and somehow right in the middle of the steepest stretch with a little less than a mile left to go I suddenly thought I could run to the finish. That didn’t happen. But, I didn’t take any breaks and was pretty proud. 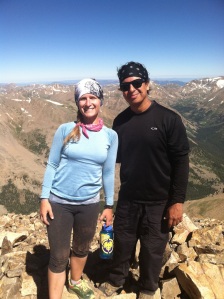 We spent approximately long enough to take this picture on the summit-it was crowded.

We really burned it on the way down. And we realized something-we didn’t start Massive until 11am on Monday-and headed down from the Elbert summit it was only a little after 10am! Two peaks in 24 hours! It felt good.

The Elbert trip was the fastest fourteener I’ve done to date. I thought about it a lot on this trip and decided to go for my new goal: 28 fourteeners before I turn 28, which means I’ve got 18 to go before October 3rd! It’s a tall order, but I think it’s doable. We fueled down at the Boathouse in Frisco-fries, mountain dew, and pizza.

The mountains are waiting, so get on your way.