I haven’t posted in FOREVER. Why? I was starting a new business.

I’ve been teaching yoga full time for a while and one of the studios I teach at doesn’t match up at all with my values, but I’ve stayed there because my teaching income elsewhere has been too unstable to leave, and also they give me benefits. Which is a long way of saying: FEAR. I’ve definitely (obviously) been thinking a lot these past few months about fear. The short story is-fear is never an acceptable excuse for anything. But we use it all the time.

I had lunch with a teacher friend a couple weeks ago and he told me: “You need to shut that toxic door if you want other, better ones to open.” And he’s right, and I know it. So, I thought hard about how to jump off the cliff and my then I thought-maybe I’ll pet sit again? Back in Michigan I did very successfully for years. So, the past few weeks I’ve been working on this:

http://www.epicdogandcat.com lmk what you think! Or lmk if you find errors!

I’ve also had a bunch of adventures in the past couple weeks (oh there is a backlog of posts and pictures, just you wait!)

I went rock climbing! A lovely student friend and another teacher showed me what’s up in Boulder Canyon. 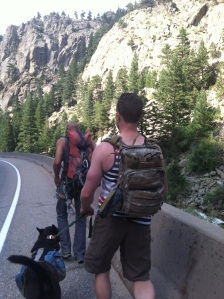 So here’s what I learned about rock climbing: even though you have a good idea that you’re safe, you have a friend on the other end of the rope that’s going to catch you if you fall (and honestly, it was rock climbing for beginners-not that f*ing far!), still when you make a move that you don’t feel 100% certain about it feels like that uncertainty is risking your life, and you have to choose whether you’re going to go for it or not in a relatively short amount of time. So rad.

As is my pattern, internet friends, I’m hooked and I’ve been all over the internet watching videos. And all over my doorframe trying to do doorframe pull ups (WHOSE FINGERS ARE THAT STRONG! I can’t even believe it’s possible! That is, suffice to say I can do this many: 0. In fact, I’ve asked several friends about this and so far I still haven’t seen anyone do it in person…)

One thought on “new business & rock climbing (or: how to risk your life without risking your life)”

Another year in the Pippa life, I can never remember the exact day but beginning of July is our 4th Pipversary! Grateful for the Little Red Trail Machine/Maximum Cute Snoots every day
🏞️
Loading Comments...
%d bloggers like this: