I really wanted to get my thoughts down right away about all the things that happened in Utah in the past 10 days before anything slips away, because I’ve already noticed after being home less than 12 hours that it’s surprisingly hard and surprisingly easy to adjust back to regular life.  I think human adaptivity is one of our greatest qualities, as a day ago I had been adjusted to waking up in a flooded, ice cold tent and my morning spider trapping duties.

On my last night on tour, a family gave me an 8 mile ride and the daughter, who is around 12 I think, told me she’s too lazy for biking or for running.  There was a book in her lap.  When I was 12 I would’ve said the same thing probably when my dad came home from a tour.  I’ve wanted to go for a long time and it’s been one thing I was too scared to go through with.  Why?  Because I’m tethered to the relative safety and comfort of the truck and my house.  We use words like “hostile” to describe the environment and weather when it makes us uncomfortable, and words like “exposure” to denote the danger of living in that environment, the real environment; the one that we haven’t manipulated.  The reality of humanity is that we don’t at all live in reality, we live in a web of environments that we’ve manipulated into being safe and comfortable.  Cars and houses and buildings with climate control, packaged food, machines and tools that we don’t really understand but are designed to make our lives easier.  Running water, indoor plumbing, and cell phones.  The number one thing people responded when I told them about this tour, before during or after, was “that sounds miserable”.  I guess it was, if that’s the way you’re going to look at it.

I was so excited, anxious, and afraid on the drive to Utah that I swear my heartbeat shook the truck.  Unloading the bike and my baggage and setting up the rig, my hands shook madly.  It was sunny and beautiful, and as I dragged the whole thing down the sandy BLM road I was parked on back to highway 313 I began to think the whole thing was impossible.  It was so heavy, and so far, and I would have to leave my tether to safety for a long time, and get impossibly far away from it (which is one thing that makes bike touring much scarier than backpacking, the sheer mileage).  But there was nothing else to do but get on the bike and ride it, so that’s what I did.

The excellent Moab bike path is dotted with mtn bike trails, and uncrowded enough that it was the only time Lu got to run untethered next to me while I rode.

The first day was magically easy; the weather was good and it was pretty much all downhill to Moab.  There’s a magnificent bike path between 313 and Moab so you don’t have to ride on the highway until you’re just about in town.  Which is nice, because riding 191 on any of the days I had to do it was one of the worst and scariest things I’ve ever done.  I slept on BLM land maybe ten miles south of Moab, and day two was the first of several days I woke up to a large and poisonous spider hanging from the door of the tent.  I was sufficiently terrified of the predators of southern Utah, because they’re hard to predict and understand.  The internet suggested making sure the tent is zipped up all the way, never walking around without shoes on, and some golden advice, “spiders, scorpions, and snakes are more afraid of you than you are of them.”  Well internet/National Park Service/Utah state government, I would like to assure you that spiders are not afraid of people at all, in fact they routinely broke into my tent to be closer to me despite my best efforts to seal them out.  So what do you do when a large, colorful, and poisonous spider is blocking your only exit?  I thought hard about cutting a new exit into the back of the tent, but instead I trapped it.  I felt sick all day, and I don’t remember if I woke up that way but I could hardly eat anything all day.

Luna: all play, no work

Day two was hard.  I knew it would be, in fact I had imagined the first couple days would be very hard, adapting to full days in the saddle and towing that heavy ass trailer, and then I would be stronger and start mashing miles.  I also imagined that Utah was basically flat (even AFTER writing out the elevation profiles for each leg of this trip), and that they never had winter.  People make mistakes.  Moab to Monticello is just all uphill, divided into steep climbs and long low grade climbs.  The shoulder on 191 is taken up with the most enormous rumble strips I’ve ever seen, thousands of potholes in a row.  Also, I think anyone would imagine that towing a trailer with a dog in it would be harder than riding a bike without it, and climbing with a dog and trailer is harder than climbing without it, but what I hadn’t at all prepared for was that downhills feel like flats and flats feel like climbs.  And that climbs are now basically impossible and require maximum effort to keep the whole freight train moving at all.  And that’s the story of how you can ride for ten hours and only get 50 miles in.  There was so much traffic between Moab and Monticello, I imagined Monticello must be the size of Denver.  It’s not.  I’ll always wonder where all those people were going, so aggressively and in such a hurry.

We slept at a campground in Monticello, as it was already 7:30p when we got there and I was too brutalized by climbing and traffic to ride anymore anyway.  The proprietor was like an old western grandpa.  It was 30 degrees that night.  Day three I woke up still feeling ill, but at least I knew I’d be off of 191 before long.  The hills between Monticello and Blanding evened out, were more rolling, and by the time we got to Blanding I was starving, finally.  I had breakfast at a diner where both of the employees looked me up and down long and hard but didn’t have anything to ask or say about it, and I put down the whole plate before the waitress came back with a napkin.  Topping off my enormous reserves of water (8 liters) at the visitor center before we left, a nice older man named Steve marked on a map for me where he thought I could find wild water in the canyons along highway 95.  He also told me that in the summer as many as 30 cyclists per day departed from Blanding to ride 95, but they’re generally supported and in groups.  “An intrepid adventurer like yourself is very rare indeed.”  Thanks, Steve.  [In fact, I didn’t see one single cyclist until 24 between Hanksville and Capitol Reef NP]. 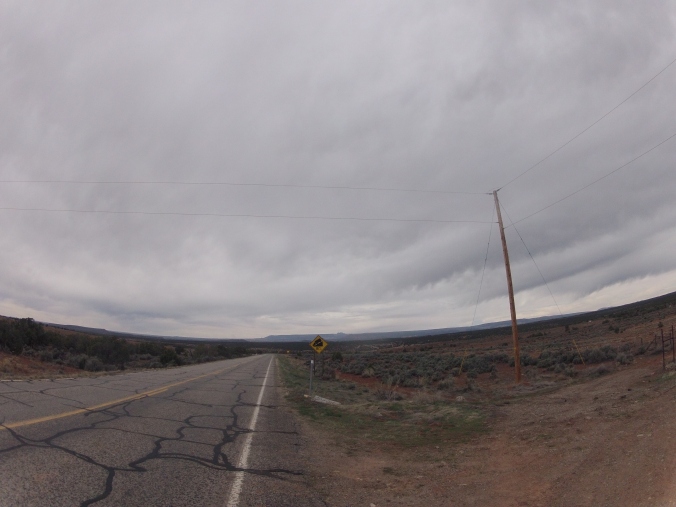 I will now always have a deep, visceral reaction to downhill steep grade warning signs.

Once on 95, there is almost immediately an 8% downhill.  Normally, I would have been braking the shit out of that hill on a massively loaded bike (with 16lbs worth of water, at least 5 days of food for me and Lu, in addition to all the gear) and towing precious cargo.  But the version of me that was somewhat brutalized the previous day threw caution to the wind and I found myself descending the serpentine road into the canyon at 40mph.  In time, I think I’ll remember few details about this trip, but that moment of delight with all of Fry and the surrounding canyons suddenly opening before me, I will never forget.  It makes me feel so overwhelmed every time I think about it, it was the first time I understood the freedom of touring and it felt like all of Southern Utah was at my disposal. 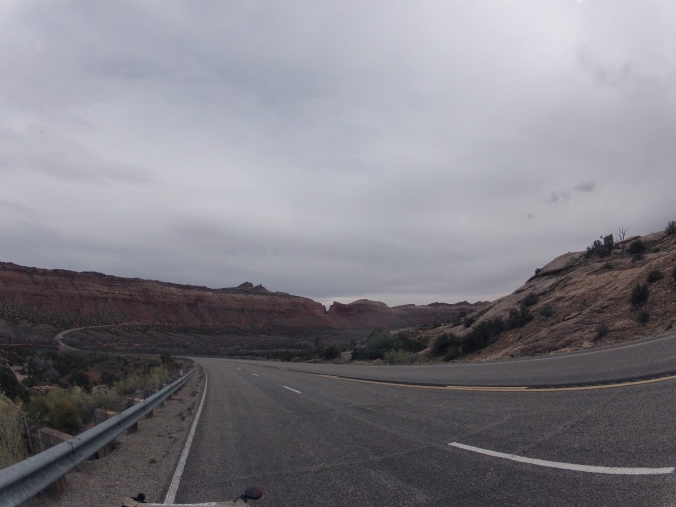 The road came through that little notch in the ridge.  This isn’t looking back on the joyous downhill I wrote about above, I didn’t take that picture.  In fact, I don’t think I have pictures from any of my favorite moments, those will live in my memory forever and nowhere else.

I know a lot of people start tours from Blanding, but that downhill could not possibly be as satisfying without the 7k of climbing leading up to it.  So, Steve had warned me that there was a big, 8 mile climb starting 20 miles west of Blanding, and after that I’d be home free.  I had hoped to get that climb out of the way that afternoon, but I just seemed to never get there.  Since this is turning out so long, I take it it’s going to be in the format of installments.  So, end of part one, to be continued. 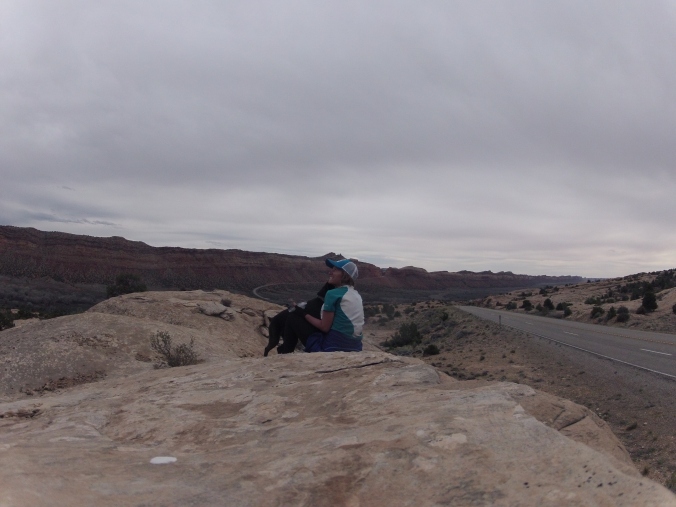