I looked up the definition of failure (you’re not surprised) and it’s pretty heavy:

1. Lack of success
2. Omission of required or expected action
3. The action or state of not functioning

I’ve [obviously] spent a whole lot of time thinking about what happened, and simply put it’s that I made a mistake that was too big to recover from. I chose to call it in favor of starting over and hoping that at least the big problems are out of my system. I think all three definitions of failure are appropriate. 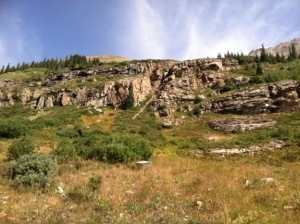 I was feeling great, having a good day of various challenges (downclimbing a waterfall, confusing elk for bear, my very first backcountry snake-on-my-feet). I knew the route, I was going east looking for a Jeep road going South and uphill. Maybe a half mile later I stopped and pulled out the map. I knew I was going the right direction-this is the part of the story that I haven’t been able to reconcile. When I looked at the map, it appeared that the road I was looking for was the one I had already passed at N Half Moon TH (that goes South and uphill) and I turned around to go back-despite that I felt very iffy that it was right. I ran that road (south and uphill) to a clearing where the road evens out and there’s a rocky gully on the left (exactly like the course description) and started climbing.

It was crazy steep to begin with, but when it got rocky the real problem became the loose rocks. I’m going to go ahead and give you this description: it was like climbing a vertical ladder made of loose boulders that could easily crush me, covered in tiny rocks like marbles so I never had solid footing anywhere. When I talked to my parents later they noted that it took me a REALLY long time to ascend this section. No. Kidding. I don’t believe it was possible to downclimb any of that crap, so my best bet was to keep going. Unstable class 4, rivers of loose rocks…I kept hoping for better and it kept getting worse. Of all the risky things I’ve done, this was the worst, the longest, and the stupidest. At one point a rock broke off in my left hand and I fell, onto my back and rolled a ways before I could get purchase on something to stop. I would eventually be covered in bruises, but otherwise miraculously uninjured (and it reminded me so much of the time I was hit by a car on my bike and I flew at least ten feet and landed on concrete, with a little road rash and otherwise fine and I just couldn’t believe how I made it out unscathed). I continued up because there really wasn’t anything else to do. It was probably the most afraid I’ve ever been; by the top my nerves were fried and I was fully hysterical.

After a fair amount of weeping, I got up and carried on, now on much more stable ground. When I reached the high point on the ridge I realized in horror that I was looking at Elbert and I could feel my mistake in every cell. I was on the wrong fucking mountain. I think it took almost 4 hours to get up there (I had budgeted 2.5 for Elbert). I started looking for a route to descend, and I turned on my phone and called my dad. We agreed that I was so far gone, if I wanted a chance to get 60 hours I would have to start over. I made that decision so quickly and started to descend. The descent was gnarly (still 1000x better than the ascent from the other side) but every minute I spend bushwacking, especially route finding over rocks and cliffy sections and struggling through thick awful brush, I get more comfortable doing it and it starts to feel more normal and less retched. It was another 2+ just to get down and several more miles to meet my crew. 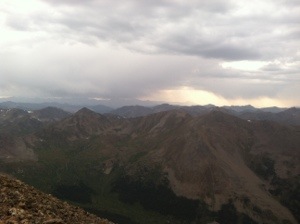 In the next 24-48 hours I would face my demons like never before. Every moment I was in the mountains this week I was struggling with how I felt about everything, what I was going to say, and when and IF I was going to go out again. My stars, I still don’t know. It seems easy to put up a date for the next attempt (a week from Sunday) but I’m still wavering on the IF. 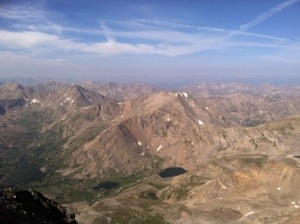 There was something in the moment after I fell that was different than the other close calls I’ve had in the mountains. Before, they’ve made me want to push harder, bigger, faster (after Capitol I believe I wrote something like “Now I know that I will unequivocally risk my life to touch the sky, because what is the alternative!?”). But this time…it felt more like ENOUGH. Since then, I’ve had a few solid days of ascents (I even re-did the one I fucked up on Sunday) and off trail. I don’t have a solid thing to say either way to finish off this post. I’m just still working it out. 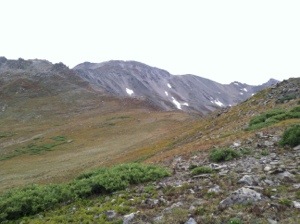