I ran my first ultra distance race, and it was so much harder than I expected (what was it that I expected exactly?? I don’t seem to remember anymore) (also, I didn’t want to do a recap but I did finish, 50 miles and 12,000ft gain, just so you’re caught up).

Then I scoped out the off trail parts of Nolan’s and who knew that the miles BETWEEN the mountains would be the most terrifying and dangerous. And I feel like I’m in over my head (and maybe a little post ultra depression). 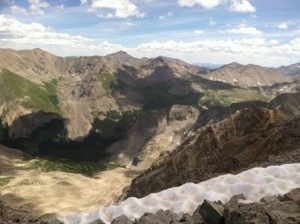 This is literally the route from the summit of Huron to Missouri. It’s reminiscent of jumping off a cliff, then you might notice there are several miles of other mountains between here and there. Just saying.

The last time I was going through a crisis like this I taped up notes all over my house, as is my tradition. “timshel-this is the ladder to climb to the stars” and “THIS IS YOUR LIFE!” They’re still there and sometimes they motivate me and sometimes they mock me. During the race I said to myself more than once STOP MAKING EXCUSES AND MOVE YOUR FUCKING FEET and I think that deserves a new sign on my door.

I searched on the internet about how to overcome self doubt and pretty much all the internets has to say about it is about acceptance. I feel like that’s one of those things that sounds all very nice but is much different in practice. I think I read something too about using the fear and doubt to fuel you. HOW DO YOU DO THAT?! 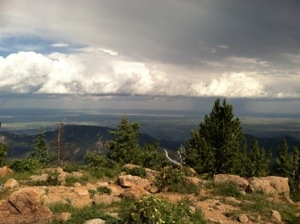 this is the only picture I took during the Pike’s Peak Ultra, from the summit of Mt. Rosa

I realized I don’t think I’ve had to deal with self doubt of this kind before…I was raised with a solid belief that I can do anything at all, and most of my endeavors (though some very challenging) I’ve seen within the scope of my capabilities. Even the 50 mile race- I was very confident going in and that turn was very hard for my self esteem to take.

Doubt is fear based, obviously. I’ve faced my fears so many times and different ways that I wouldn’t say I’m fearless but I’d say my perspective is a lot different than it used to be (how about the time I slipped and almost fell off the Sawtooth ridge and conquered my fear of spiders, the time I was charged by a bear, when we started an avalanche, or one of multiple times I was lost in the winter on Pike’s). But doubt is such a different kind of fear. I’m used to risking my body or my well being. But what about trying when you don’t believe you’ll do anything but fail? Gosh seeing that on screen brings tears to my eyes. I’ve given up everything else in my life to move here for Nolan’s, basically, it’s about time that I admit that it’s why I moved here. And if I can’t do it? What will my life be then?

See, now we’ve gotten to the heart of darkness here. Not only have I spent the last NINE MONTHS with the single point of focus of training for Nolan’s, but I’ve made it my life, too. Can I really not look back on all the thousands of hours of training and say that I had fun? That I suffered but I also felt the greatest joy? I struggled, I fought, I believed; I saw the most beautiful places, I touched the sky, and I triumphed. The highest highs and the lowest of lows. Is the trial of miles really just about the end point? No. I’m underestimating and devaluing myself. It’s the miles and miles of trials. If I finish Nolan’s it will be the greatest moment of my life. But if I don’t, it’s not as if I don’t have so many smaller triumphs to look back on. To be proud of. I RUN MOUNTAINS. I mean I run mountains, 14,000ft mountains. I am stronger and tougher than I ever have been. As rough as it was, I crossed the 50 mile finish line running strong. I’ve earned every piece of these accomplishments. 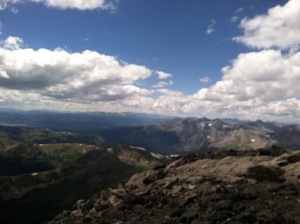 glorious fucking summits. I am mad in love with summits.

The thing that I love about long distance running (that I think is also the hardest for people that don’t do it to understand) is when you have nothing left to give, you wish you could lay down and die rather than keep going, and you dig into the deepest bits of yourself…that’s when you see who you are, what you’re made of. When I’m there, in the lowest of soul crushing lows, and I see what’s really in there, it’s I WILL NEVER GIVE UP. I see now that that’s what really matters. The finish line is a great moment for anyone, but it’s not the only moment, and the finish of Nolan’s is not my life. Every piece, every minute, every new friend, every brutal climb, every perfect blue sky, every painful struggle and every summit that brought me this far-THAT is my life. 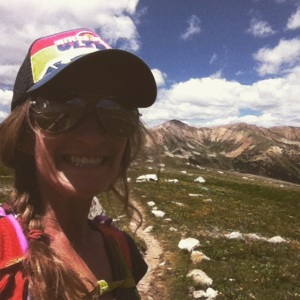 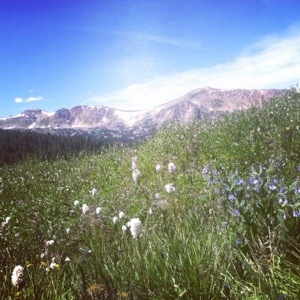 just another day in paradise