Decisions made in the mountains are so different than in the real world. There’s also something to be said from beginning any endeavor with a “it’s in the bag” mentality.

from the meadow just after the TH

After the Capitol attempt, I felt really good about the 28…basically like that chapter was almost closed, and it was just a matter of finalizing it. I knew I wouldn’t head back to the Elks again until I do Av training and buy an ice axe, so I estimated that the official 28th would be Mt. Lindsey. I put it off a couple weeks so that I could go with Mark, and celebrate proper. The day before, we were texting things like “finally finishing the 28th!” “28 is in the bag!” the weather was forecasted to be clear, sunny, high of 42, 10mph winds. Not bad, not bad at all. The round trip was 8.25, all class 2, and aside from some snow and ice it was in pretty good condition. 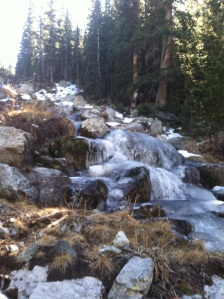 We even didn’t plan to leave until 6:30a because we weren’t worried about getting an early start. And we went to Slohi, where the people are very sweet but it takes a very long time for them to make your drinks (do they realize how funny that is?) It was a four hour drive from Denver, there’s a long network of forest service access roads that will be totally impassible come winter. We started off at the TH at like 11am. The hike in was nice. We got mildly lost when the snow blocked a twist in the trail, but we found it again. Arriving at the saddle, the wind picked up. The route seemed obvious, we took a dip down from the ridge on the snowy side and it was a little tricky with the ice but definitely okay. When we got to the point where we could see the gully we’d be ascending, it was very icy and long. We chose to ascend early, climbing the rocks in a rockier, less snowy part and heading to the ridge. I knew there was a ridge route so I thought we’d be able to summit from the ridge. I was route finding.

On the ridge, things were definitely a little dicey. Lu was okay, but I was getting a little worried about her. The wind was picking up quickly, making the climbing feel unsteady. I saw what was ahead and stopped suddenly. Mark caught up and said “I don’t know about this” and I was strangely optimistic. I kicked my foot out on a ledge to the left to see better, and saw what was below me (nothing). It was like a mini version of the knife edge. And on the other side was the crux wall of the ridge route. I was enamored by it, but I couldn’t think of any safe way to get Lu to the other side. The wind was whipping at this point, throwing bits of ice into our eyes (10mph my ass). We decided to head back, and almost immediately regretted taking the ridge back, trying to down climb on the ice. Lu couldn’t find the way that we got down one part and she spent the better part of 5 minutes pacing back and forth and whining, freaking out. She could get down fine, but she just didn’t see the way down. It was terrible, poor girl.

Mark, descending the ridge. Things were too gnarly to stop and take pictures before now!

We found a way down from the ridge back to the trail, and headed back out towards the saddle. Arriving at the saddle, we estimated if we should go back and try the route the way we were supposed to, going up the gully. The wind I’d estimate was nearing 50mph, as I could lean into it 45 degrees and be held up. We agreed to call it and headed down the saddle as fast as possible (by that I mean we glissaded on the ice! Or rather, I did). It wouldn’t have been that hard or taken that long to finish it. I’m not actually sure why we gave up and headed back.

Mark and I, over the icy river

It was a nice trip back. I didn’t feel that bad about not summiting, it was a gorgeous day in the mountains. I would like to finish the 28. It’s been an epic journey and now that I’ve done 98% of TWO 28 attempts, it’s going to be nice to call it closed. I’ve talked a lot before about how good I feel in the mountains, how I want to be a better person. How just existing there is enough. Then we go back to the city…it’s enough to make me move out there…

In other news, I’ve been training for the next adventure. I’m about ready to make it official.