On this trip, I took fewer pictures but made a couple videos. LMK what you think of this format!

We got an early-ish start. Ultimately, I was up later than planned packing and writing route directions out and I didn’t want to start this on no sleep, so I set the alarm a little later than originally intended. Then we got stuck in the blasting traffic near Idaho Springs. Belford went off without a hitch. There were storms forecasted for noonish, about 60% chance I think, so I was watching the sky pretty fervently and it was going back and forth between sunny and ominous all morning. A group that summited right after I did had been planning the Belford/Oxford double and called it due to the foreboding weather in the distance. Not enough for me to give it up on a day like this though! Lu and I headed down from Belford to the Southeast, on a low saddle that would provide a lot of cover should the weather turn quickly. Otherwise, both of these mountains were relatively barren. It was so windy, but the weather was holding. 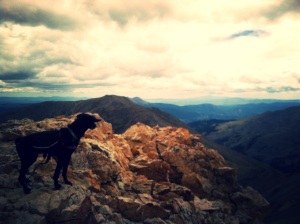 Lu on the summit of Belford, looking out over the Collegiate Wildnerness (like a boss)

We nearly got blown off of Oxford, and headed back down immediately to cross the saddle and head for Elkhard Pass. We would be taking a south ridge off of Belford to head towards the pass and to Missouri. The whole thing was very straightforward, and when we reached the pass there was a faint trail up a shoulder towards Missouri. Assuming this was the standard route that I was headed for, we took it.

Doesn’t look so bad just yet

It turned class 3 very quickly, but I was undeterred, thinking it was just misclassified and Luna was fine. Then, just as we were approaching the final ascent to the summit ridge, it turned very much class 4. I was having a good time navigating this and still in good spirits, but Lu was getting stuck a lot, to the point that helping her was getting dangerous, and the last pitch was going to be impossible for her. I really wanted to give it a go, and even though she was right at the bottom I didn’t want to risk anything by not being able to get to her if something happened. So we descended the crazy ridge to look for the real route up Missouri. We lost a lot of elevation, but found the route and it was much simpler. It really didn’t take very long to get up all the switchbacks. As we approached the summit ridge (from the other direction) the storm clouds were coming in hot and we ran to the summit, tapped it, and headed back down as quick as possible. 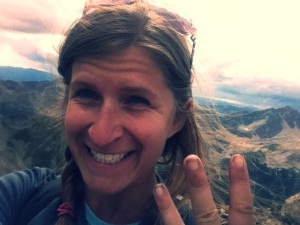 This is actually from the ridge next to the summit, which currently has a terrifying storm cloud right over it. The rest of the ridge was surprisingly sunny, so I stopped to take this real quick

It didn’t start raining until our last 4ish miles, which was pretty miraculous. By the time we set up camp near the Huron Peak trailhead, it had mostly stopped raining. I even got a fire started on damp wood, which I was pretty proud of. Realized I didn’t have a can opener and haven’t replaced my lost multi tool yet so we were SOL with the baked beans I brought. More PB&J. I read Zen Mind, Beginner’s Mind and fell right asleep around 7:30pm.

Up next: three more fourteeners and much more mileage is on my plate for day 2!