With another Wednesday almost all the way off, I elected to get up at 3:30a to do La Plata Peak (14,336ft, 9.25mi) before the storms rolled in at 1 (something like 90% chance…and they started as we were pulling out). The TH was hard to find, you park off the main road then walk in like a mile, but it’s not marked well plus it’s unusual to walk in on a road without the TH in site. Naturally, I drove into the forest on a very bad service dirt service road and wasted about an hour, looking for the TH and only finding a bunch of obscure signs and random, unmarked roads. By the time I rolled back out to the main road where the TH parking is, I was super frustrated. So frustrated that I was about ready to head home (whoa nelly, Sarah, calm your shit down). I parked and got out, just in time to meet up with a couple that were walking around in confusion as well. We walked in on the road together and found the TH and I departed from them pretty quickly, ready to burn up the mountain fast and dirty (with all that extra vigor for getting so annoyed about nothing). [fun fact: the couple had only eaten chocolate frosted donuts for breakfast-I abstained from telling them how well *that* works out] 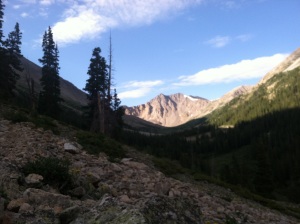 Mama nature, you stop it with your damn epic views. I’m so tired of hiking with gorgeous backdrops all the time! #nofilter

Once you get out of the forest, the views get amazing and you hit the brutal switchbacks that are the worst part of the route. I passed two decent-sized groups that were split up over the switchbacks. Several of the poor dears were carrying gallon jugs in one hand and a couple of the girls were wearing purses [wondering what happens to them? I’ll see them later]. They loved/hated Luna, exasperatedly commenting about how epic she is and WHY DOESN’T THE ELEVATION EFFECT HER?! Business as usual.

The switchbacks were over before we knew it, and we continued through the meadow eating PB&J without stopping. The ascent up the ridge was grueling and somewhat terrible because the whole time it looks like you have so much more to go. The first couple I saw descending told me that it’s not as far as it looks. I disregarded this information, thinking “oh. really. it looks fucking far.” Then it turned out, maybe 5 minutes later we hit the saddle and you could see there was only one last little bit of talus hopping to the summit. [Here’s an aside for you: when I suddenly got interested in mountaineering, I was mildly annoyed at the constant use of talus and scree in trip reports and route directions. I gleaned a basic understanding, that both were referring to broken rock bits. I assumed there were solid definitions of each, but it turns out NOT. They both refer to broken rock bits, or a formation made of broken rock bits. Neither is specific to size. Scree comes from skrioa, Norse for landslide. Talus comes from the same word in French, meaning slope or embankment. Now, you can refer to talus and scree with pride and look very cool. You’re welcome.] 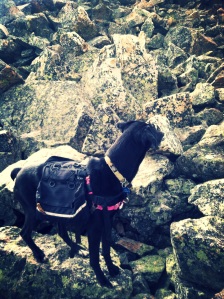 Luna sizes up some rocks. See? How hard was that? Just call it like it is.

While scree-hopping (see what I did there?), we came across a whole group of teenage girls that I was initially annoyed by (SO. LOUD.) but that quickly spent 15 minutes petting and fawning over Lu. So I cut them some slack. Evidently, Colorado summer camps take field trips to hike fourteeners. I was pretty impressed with these girls, as there were plenty of grownups still heading up the switchbacks and crying about it.

Me giving you a thumbs up on the summit. Because I’m cool like that.

We took some time to hang out on the summit, but with my later-than planned start and what I assumed were impending storms, we headed back down pretty quickly. [MORE BRACKETS. There was a family of 3 on the summit eating Subway sandwiches…it was like 10am, so they must have purchased them the night before? This bothered me and I spent more time than I should’ve thinking about it] 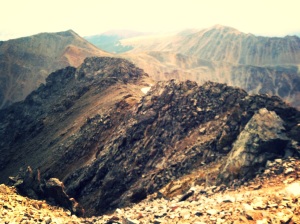 The gorgeous Ellingwood Ridge, named for the first person who climbed it in the 20’sish.

On the way down the main ascent, we stopped to tell our fellow travelers that it’s not as far as it looks and they gave me skeptical looks. I ran into both groups of newbies, one about to tackle the ridge with fear in their eyes, and the others lunching in the meadow with resignation. Both stopped me to talk, and I tried to give them an accurate assessment of what was coming next, but it turned out they were uninterested in my guesstimates of time to the summit, or in my warnings of the coming storms. They wanted to talk about Lu, quel surprise. 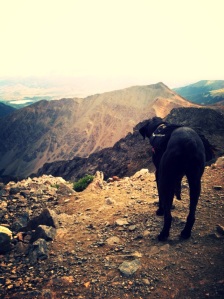 because Lu is the shit, obv

The hike down was uneventful, which was good, because the storms didn’t hit until I was all the way to the car and on 24, headed back to Denver. And hit they did, hopefully everyone that was up there made it up/down safely. When everything was said and done, I was home by 3p! Definitely a successful trip. 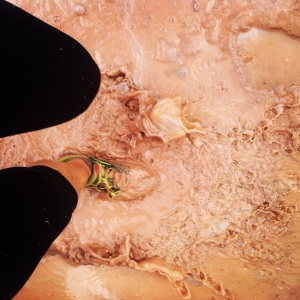 I’ve shaped somewhat of a plan for the Collegiates: one day is Oxford/Belford/Missouri and the other will be Huron/Harvard/Columbia. I’m getting pumped, TWO WHOLE DAYS in the woods?! Shit’s about to get all kinds of rad.

3 thoughts on “la plata (also updates-hitting it hard, and sarah starts using brackets all the time)”