Mt Princeton (14,204) is generally believed to be the crux of the Nolan’s route. Its long approach, almost entirely off trail ascent and descent, and the fact that it generally falls overnight in most people’s attempts have led me to believe that if Nolan’s were Super Mario, Princeton is the big boss. Once I make it past Princeton, nothing will stop me from finishing.

It was incidental that last summer, as I hammered down every part of the Nolan’s route, I tread nearly every piece of Princeton except the summit. I spent 3 days route-finding from the Avalanche Gulch trail, putting tons of miles in figuring out the [long] way up off trail on the NE arm. I spent a day in Grouse Gulch, learning the descent. But I didn’t summit. Princeton was the only Nolan’s mountain that I did not stand on top of all year.

As I considered my winter training, I knew that I’d have to push harder on winter ascents this year (no matter how miserable! I would prevail), especially since I planned/am planning an ambitious July attempt (if you don’t remember from last year, there was still waist-deep snow in the mountains at the end of May, summer doesn’t generally start until the end of June). I knew that I had to do Princeton in the winter.

When I drove to Arizona in February, I hadn’t yet managed to do more than Elbert, Massive, and La Plata (I was busy skiing I guess). Passing Princeton as I drive through BV, gracefully and commandingly taking up the sky, I thought “Princeton is such a boss, I have to get up there.” (I not only thought this but texted a running buddy, who was not thrilled like I was).

After AZ, I came back injured and spent a month trying to get back on my feet. One week ago, I went out for my first long(ish) run. Basking in the glow of Princeton on the East side of BV, I resolved to get up there. Another friend asked if I wanted to run together, I suggested Princeton, and ultimately plans fell through.

It’s not that Princeton (or any Sawatch Range winter ascents) is inherently dangerous or harrowing or even difficult.. just long, somewhat miserable slogs. Which is why I was hoping for company (because good company can make even the longest of drags fun) but I guess it wasn’t in the cards. Despite a lousy forecast, I headed up Princeton on Friday. The weather was beautiful when I got there, clear and sunny and warm, but turned terrible about 6 miles in. I got this picture just before it started snowing and visibility was totally lost (and my phone turned off because it wasn’t willing to suffer the new frigid wind), 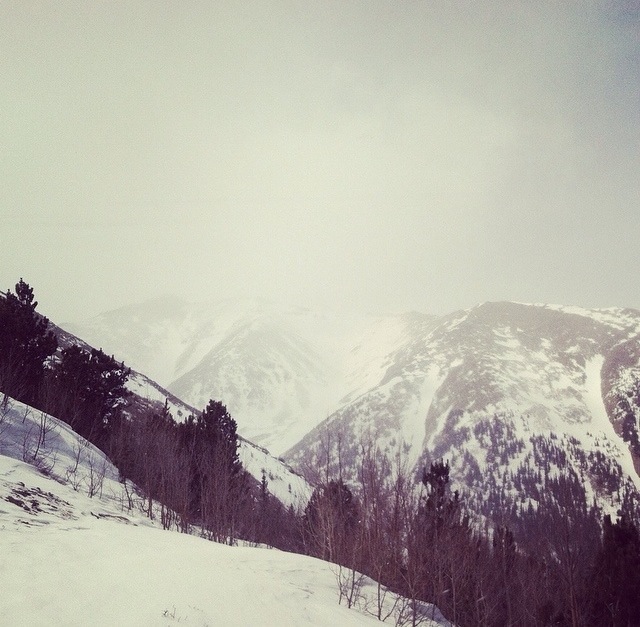 Terrible weather in the winter doesn’t scare me or even affect me that much (as long as I know the route well enough). It’s even kind of appropriate, because it’s slow and miserable to begin with so the weather’s like “hey, why not take away your view, too?” (“Bwahahaha”, because I think the weather should be personified). Someone asked me after if it felt good to be in the mountains again, and I didn’t really know what to say…it felt normal. It wasn’t “fun” and there wasn’t the thrill of standing on a summit (conditions were so bad you could have been standing anywhere and just seen gray). I had kind of forgotten just a little what it feels like to endure…so at least I still had that sort of toughness to push on.

The truth is, some days I’m so pumped to get back to climbing mountains and running again, and other days I don’t even want to go outside let alone spend another full day dragging my legs through the snow. I heard a team went up the Maroon Bells, and at first I was inspired, then it faded to meh…fuck that. As does everything eventually, I think this whole thing boils down to GOOD VS INTERESTING. Would you rather your life be good or interesting? Most people say good. If you read that question and thought “why would you ask a question like that?” Or “why can’t it be both?” That’s ok, I get it. Sometimes I admire you, a lot of times actually. I’ve come to realize during this time off that I can’t just read and watch TV, or study yoga or design or whatever I get into. I need the full spectrum of pain, the challenge, the risk, the fear, the incredible doubt. I choose interesting, and I don’t care at all if it’s good. Good is such a relative term. When someone asks you how you are, you say “good.” I don’t want easy, and as much as I sometimes regret moving up here because it is quite the POLAR opposite of easy, I know that this is where I’m meant to be.

It’s hard being 29 for a lot of reasons. There’s the cultural/societal pressure around 30, and there’s this “return of saturn” business that I would have never believed in except that I’ve been having rolling emotional/life crises for months. Sometimes I think “how the fuck did I get here?” Or “what have I DONE in the past 10 years!?” But I will never measure success by my job or my house, my friends, my bank account. At least I don’t ever feel like “why aren’t I married?” It’s more like “WHY haven’t I been to Banff!??”

I guess the point of all of this is, I climbed Princeton and it didn’t feel like epic or harrowing or victorious. I just quietly surpassed my recent (injury-induced) doubt and accepted that this is who I am. Some days I am NOT okay with it, and I wish I could stay at home and eat pizza and watch TV all day…and sometimes I do (and whether you know about chakras or believe in them, let me tell you when I stay home it physically hurts beneath my sternum and in my solar plexus). And sometimes I go out and run mountains.